The Addu Atoll in the Maldives is the perfect attraction for divers who are in search of shipwrecks, manta rays, sharks, sea turtles, and other marine life. There are four channels in the atoll: Gan Kandu, Viligili Kandu, Maa Kandu, and Kuda Kandu, and these channels have few caves. Currents are not that strong compared to other atolls so the channels can be dived most of the time. Diving depths can be between 35 to 75 meters.

History of the shipwreck

The shipwreck in the Addu Atoll is the former 5,583-tonne oil tanker “British Loyalty” that was built in 1928 and owned by Palmers Co. Ltd., Newcastle. The ship was first torpedoed by a Japanese midget submarine in Diego Suarez harbor, Madagascar, in May 1942. Only slightly damaged, the ship was taken to the Addu Atoll in 1943 as a storage hulk. She was torpedoed again in March 1944 by a German U-boat, the U-183, when the submarine fired through a gap in the submarine nets around Gan Kandu. However, the ship did not sink.

Finally, the “British Loyalty” was scuttled in the atoll in January 1946 when the British withdrew from the Maldives. 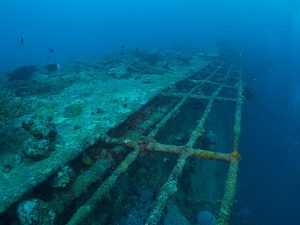 Image from: the Maldives expert

The wreck actually lies between the island of Marathon and Hithadhoo. The ship is lying on its starboard side around 33 meters at the bottom. The total length of the wreck is 140 meters and its bow is 16 meters. The ship has attracted a growth of hard coral and soft coral that covers large clumps of the ship. There are two large holes, one on the deck and the other on the keel, most likely caused when the ship was scuttled by a British warship. These holes are large enough for divers to swim in and out of the ship.

Schools of blue-fin jack and turtles swim in or around the wreck, while smaller fish find homes in the coral. Manta rays and sharks can also be found swimming around the shipwreck or in the channels.

There are other areas around the Addu Atoll where divers can find more marine life, whether in large groups or individually. The Addu Atoll is a perfect stop for Liveaboard diving yachts BEST OF SOUTHERN ATOLLS, especially in the vicinity of the shipwreck.

← What to Expect When Diving in the Southern Atolls: Addu to Koodoo
Largest Manta-Ray Gathering in the World is in the Maldives →